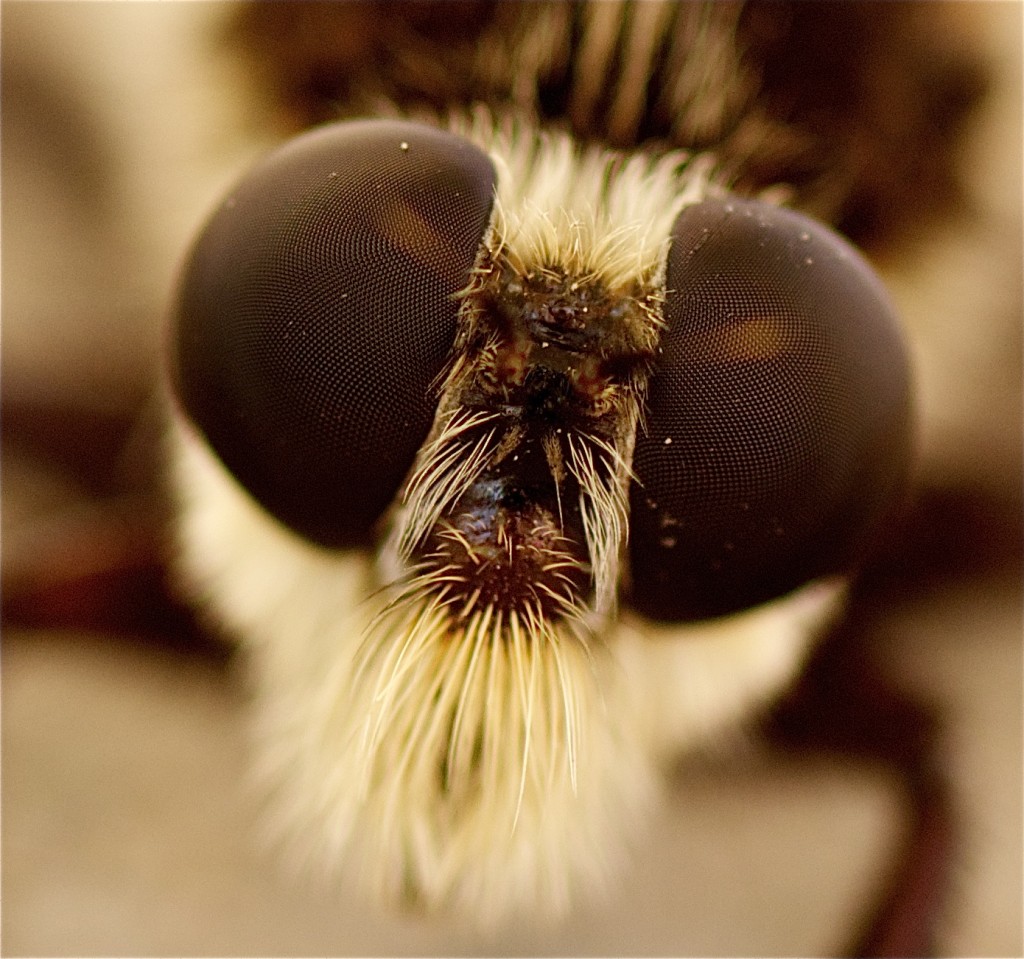 When I was about 11, I used to spend a ton of time at my friend Sue’s house. We played a mean game of roll the ball down the dark hallway, swam in her pool, hung out in her very cool room, ate ice cream and occasionally studied our faces in the mirror. One day I said, “I like the way I look from far away better than close up, don’t you?” And Sue, as straightforward as they come, said, “No. I like myself up close better.” Of course I immediately moved close to the mirror again to see if I had been wrong about myself the first time. Nope. Same answer. I definitely looked better from a bit farther away.

After I took this picture of this brown honeybee (or brown bumble bee, not sure which yet), who was sitting comfortably under a table while we held our garage sale, I cropped it so I could check out its compound eyes more easily. Fascinating! From far away, their eyes look like bulging black bumps, but up close they have a miraculous and beautiful pattern made up of THOUSANDS of tiny lenses called facets. Facets? Hmmmm…just like me. Facets. I have thousands of them too, although they do not necessarily affect my vision, nor do they make me attractive when I am microscopically close to a mirror. But before I explain where I am going with this, check out the brief info below about a bee’s eyes, which I got from:

Like most insects, honey bees have compound eyes that are made up of thousands of tiny lenses called facets. Scientists think that each facet in a compound eye takes in one small part of the insect’s vision. The brain then takes the image from each tiny lens and creates one large mosaic-like picture. This image is somewhat analogous to the image produced on a television screen, in which the “picture” is essentially a grid composed of dots of light. The advantage of the compound eye is its ability to detect movement. Honey bees can easily differentiate between solid and broken patterns, but show a preference for broken figures. Related to this, bees respond more readily to moving flowers than to stationary ones. Therefore, their eye is better adapted for movement perception than for form perception.

And just as a bee’s eyes are specially adapted for movement, my many-faceted self must certainly be adapted for something, right? Is it that I can negotiate chaos with only occasional meltdowns? Is it that I can ignore the bulging trashcans and write this blog instead? Is it that I am good at making pie crusts? I’m not sure. Unlike the bee, whose eyes have made good and specific use of its facets, I am still examining mine…exploring each one to try and understand what grand purpose or purposes for which I might have been fashioned. Sometimes this requires standing very close to the mirror without judgment. Other times I stand back and appreciate the well-roundedness of this “jack of all trades, master of none.” Multi-faceted? Hmmmm. Diamond in the rough?