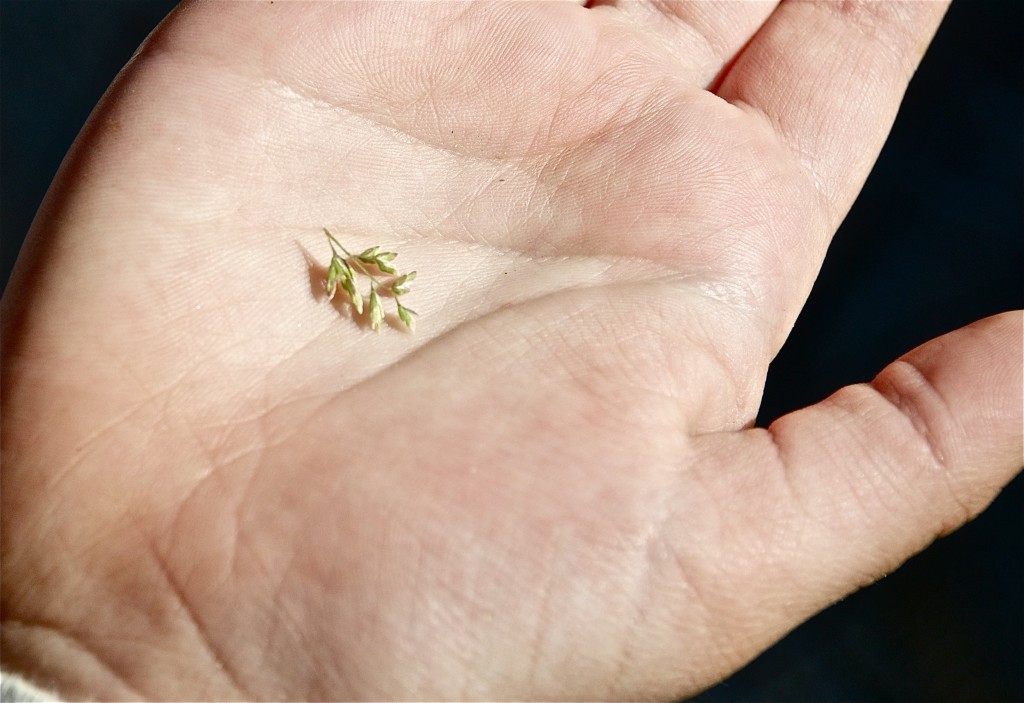 William Blake’s Auguries of Innocence was the first thought I had when I saw this picture in my haphazard portfolio of photo memories. To be clear, it was this small bit (the part most of us know) that came to mind:

To see a World in a Grain of Sand
And a Heaven in a Wild Flower,
Hold Infinity in the Palm of your Hand,
And Eternity in an hour.

William Blake (1757-1827) has seen fit to send me a personal augury (a sign or omen) today: this part of his poem, in a book of the same name; a gift from my mother, was one I read over and over again as a child. When Mom gave me a mustard seed pin, I would think of these lines yet again. Thus began my education about the power and beauty of tiny things. To this day I am fascinated by the minute: the artists who make miniature replicas of life from clay, teensy dew drops that only my macro lens can capture, microscopic particles, insects hidden under rocks and between blades of grass, and minuscule inklings about strangers.

My son’s find (pictured above), important enough to him that he stopped playing to bring it to me, made me smile then, but amazes me now. He is nine–and he loves nothing more than time outside running around with friends. That a small wheatish grain could stop him in his tracks moves me beyond words and into reverence. To see a world in a grain of sand…

Lately I have been seeing a lot of the microscopic; the importance of small moments within relationships, brought home by death, Alzheimer’s, illness and the steady march of time that grows my children up while I am blinking–unwilling to take in what I am seeing, yet embracing it all the same. There is no solace in ignoring what is before me. The greatest struggle, however, is not in the seeing, it is in my inability to refocus, or perhaps de-focus, to zoom back out and enjoy life without feeling everything at a cellular level.

I seem to be craving the opposite of Zen moments; it is oblivion and pure abandon that I crave (yet can’t imagine), but only because despite the blazing beauty of my current hyper-aware state, I am getting burned. I am living in constant awareness, attempting to make the most of everything even as life’s constant thrum stokes the fire that blazes within me. Is it okay to be this vulnerable, this open?

Perhaps the answer lies in the kind of sloughing off one would do in a plane that is too heavy. Out would go the unnecessary items; in this case: guilt, regret, unnecessary and self-imposed expectations, insecurities, perfectionism, procrastination, fear, doubt, and that ever-present Everyman persona. Without these companions, I am already breathing so much easier that even my son holding infinity the palm of his hand won’t shake me.

Eternity in an hour, however, may be an entirely separate matter…